It is a science park created to utilize the facilities and grounds after the 1993 Daejeon EXPO as a science education space for citizens. It has many attractions including a simulation theatre, where the chairs move with the movie, electrical energy pavilion and others. At Hanbit Tower, which is the symbolic tower of EXPO Science Park, you can overlook major regions of Daejeon city. The first observatory has a unique knotted circular shape that resembles a space station. Many visitors come to the science park that is a playground of children to develop their imagination. Also, Daejeon EXPO Memorial hall and World EXPO Memorial museum, opened recently, display over 5,000 precious mementos including the world’s first all nations flag scarf from Queen Victoria.

EXPO Science Park is a theme park to succeed and commemorate the successful holding of the 1993 Daejeon World Expo, and has the Daejeon EXPO Memorial hall and World EXPO Memorial museum. They are top quality in Korea and are full of various events year-long. From the symbolic Hanbit Tower, you can observe all the major regions of Daejeon city at once. It has been 20 years since the EXPO Science Park was built on Hanbatbul field. With the symbolic sculpture of Daejeon, ‘Hanbit Tower,’ and ‘(EXPO Bridge)’, this represents a scientific castle that has been developing the hope of children. The girls and boys now have become mothers and fathers and visit this park holding the hand of their children. 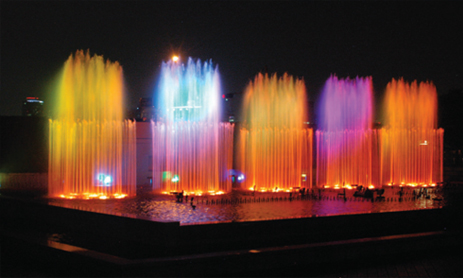 The musical fountain of Hanbit square has become popular for summer visitors through word of mouth. It provides the best dating place for couples offering beautiful memories and the best multi-media show in Korea diversely presented in wonderful harmony.

The live radio show has stories and music and gives a chance for couples to propose. It also provides resting time to families who have come out for a walk to cool down on tropical nights. It operates from late-June to late-August in summer at 8 pm, 9 pm, and 10 pm (on weekends) everyday. Although childhood memories of the science park faded away, it is newly shining with the history of time where dazzling development of cutting-edge science in the past, present, and future coexists. It is a science world that reminds adults of childhood memories, has lovely events for couples, and offers imagination and dreams to curious children. It is a world of hope where precious memories of fathers and mothers are passed on and gives infinite imagination and dream to children who are future heroes. This is Daejeon EXPO Science Park - it turned 20 years old in 2013.