Dongchundang is where the first house built by the ‘Father of Dongchundang’, teacher Jun-gil Song, was moved. Dongchun means to ‘be like lively spring’, and the teacher read books and educated students and created Hyedeok Hyangak (Korean music). As nation-designated cultural property number 209, Dongchundang has a signboard that Wooam Si-yeol Song wrote. The structure is relatively simple and the size is not excessively large. The four sections on the right make up the main floor and the two sections on the left have an ondolbang (Korean heated floor). In front, it is covered with parquet floor boards, and at the bottom of the ondolbang, there are panelboards applied. For the foundation stone, tall squared cornerstone was used and this is a standard form of separate house architecture from the late Joseon dynasty. Behind Dongchundang, there is the old house of Song jun-gil. It is registered as tangible cultural asset number 3 of Daejeon Metropolitan City. The separate ‘Song ssi byul myo’ is a shrine keeping only an ancestral tablet of Jun-gil Song.

Stepping into the front gate of Dongchundang with two posts, low see-through walls extend. According to a reference, the aerial view of Dongchundang illustrates six sections of the house, where 4 sections on the right make up the main floor and 2 sections on the left have an ondolbang with a closet in the upper northern part of the room. The shape of the main floor is built with Tisalmun (Korean traditional door pattern) in 3 faces, except for the one facing the room. Among them, the front and the right were built as lifting doors.

Dongchundang was built with low walls so as not to separate you and I, or nature and humans. The harmonizing mind of the Dongchundang says that humans are only part of nature, and this is displayed as it is on the house. Dongchundang is simple, rather than fancy. What the teacher meant was: ’the widened floor and worn cornerstone came from nature, and also the person who was living there came from nature, so do not split them into different groups.’ The house illustrates his meaning from inside to out. 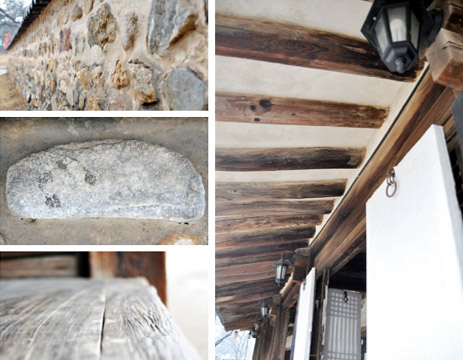 Dongchundang also acted as an important place for cultural exchange in local society. It functioned for reading, studying, and meetings. Teacher Jun-gil Song served both in terms of reading and education. To train talented individuals, he made Heoduck Hyangak. Dongchundang was a networking place for many people at the time.

The signboard saying ‘Dongchundang’ was written and hung up by Wooam Si-yeol Song personally, six years after teacher Jun-gil Song passed away. The teacher would not be lonely because he hung the signboard meaning ‘Always be like spring’ to be remembered by future generations.

The precious signboard is more meaningful with its registration as Nation-designated cultural treasure number 209. Behind Dongchundang, the old house of teacher Jun-gil Song is found and the view harmonizes in unity. From the golden stone wall at the entrance of Dongchundang to the faded floor, where did the noble color of Dongchundang come from? This place, where sunlight, wind and mind are alive, is always warm like its name