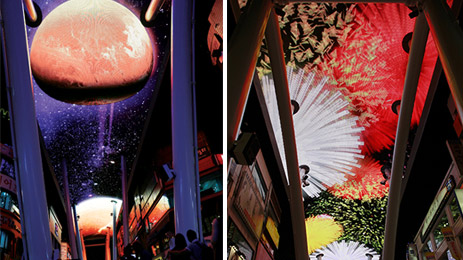 From the 1960s to 1980s, this was a mecca of administration, businesses, and traditional culture in the central region of South Korea. Now it is rising again as a street of Art & Culture. There are over 150 active businesses related to art and culture including art galleries, concert halls, small theaters, exhibition, performance facilities, art supply stores, ateliers, pottery studios, and antique stores. Various festivals including Uineungjeongi festival, Youth maim festival, and the Art and culture street festival take place. In addition, Sky Street that opened in 2013 was built with an arcade-type LED screen equipment with a length of 214 m, width of 13.3 m and height of 20 m. It is a famous tourist attraction in Daejeon and displays a range of content providing both entertainment and publicity using the main screen and media hub.

Uineungjeongi Cultural Street is more recognizable at night with colorful lights. After sunset, Uineungjeongi street becomes a place for parties. The lights make the ceiling of the street a small universe. Walking along the central street from Daejeon station square, the visitors pass the central market that has been responsible for trading and old restaurants and has a long history. Continuing, a famous place in Daejeon, the Mokchukgyo Bridge appears. Mokchukgyo Bridge, proudly representing a long history, was restored in 2009 as a water-friendly space. It is now covered in beautiful sculptures and is re-born as a bridge with a beautiful landscape. Passing the Mokchukgyo bridge, the visitors reach the main place for today, Uineungjeongi street. If there is Myeongdong in Seoul, Chungjungro in Gwangju, and Dongsungro in Daegu, there is Uineungjeongi street in Daejeon. This street is as famous as local celebrities.

Daejeon’s youth and culture are concentrated on Uineungjeongi Street. The street is full of fashionable young people and is overflowing with famous brands, restaurants, and entertainment. It is called ‘downtown’ by the people of Daejeon and has everything, including culture, art, youth, music, and pets. 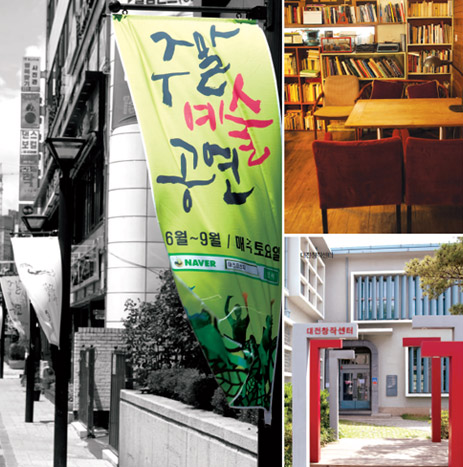 This street does not restrict based on age because it is called the street of youth.

From the 1960s to 1980s, it was a mecca of administration, businesses, and traditional culture in the central region of South Korea. Now it is rising again as a street of Art & Culture.

Various festivals, including Uineungjeongi festival, Youth maim festival, and Art and culture street festival take place here. In addition, the Sky road that was opened recently is built with a huge LED screen facility in the city and displays various artworks and feats of sophisticated technology. As it has a long history, middle-aged individuals have memories of this street. They are now almost gone, but there are still theaters that were famous with couples and bars and cafes with old tables. A bakery with 50 years of history gives a ‘taste of memory’ and lures not only regular customers but also visitors from outside of the city with delicious smells. 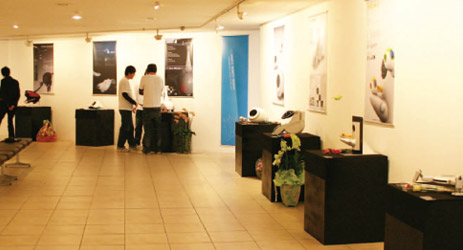 Daeheung-dong cultural street was developed to stimulate the original city center and waits for visitors with its traditional appearance. Another important attraction at Uineungjeongi street is an underground market. The underground path connecting Daejeon station to the old provincial government building is a resting area for citizens of Daejeon and has been admired for a long time for its small department stores. It also has a parking facility and is convenient to visit with children. As the Daejeon Citizen University came in place of the old provincial government building, citizens living in Seo-gu and Yuseong-gu often find the original city center. This has stimulated Uineungjeongi street. If you look at Uineungjeongi street carefully, you can imagine that ‘all lost memories are gathered here.’